I was still in school when I met a real live Santa Claus. Michael Allan Hamlin (MAH) went to our Parish Gift Giving in full Santa regalia. Imagine this tall American, decked in what was probably the hottest Santa costume of all time, in the sweltering heat of Manila. When MAH went out to that court, the kids went wild. Like me, this was probably the first time they ever saw Santa Claus for real.

Boy were those big shoes to fill.

You see, I never once imagined that I would get to play Santa. But that fateful day came when a colleague playfully asked me if I wanted to be Santa for the My Dream in a Shoebox Pamasko sa Mga Bata. My answer? “Seryoso ka ba!?!?” Turns out she was just joking. But it got me thinking. And being the impulsive Andrei you all know and love, I went over to her and I said yes.

So I told my mom. And knowing my mom, because I’m a Carada, you have to be EXTRA. She sent forth her ever resourceful EA Ate Dana who found two awesome Santa Costumes just in time for Christmas.

My mom then hand-stitched and repaired them so they fit just right. She even made a belt out of velcro and this stretchy cloth that wraps around perfectly.

It’s amazing the effect of a wig, a fake beard, and bright red pajamas can do. The kids looked at me with this look of genuine awe and wonder. It’s Santa Claus come to life! Kids came up to make mano and gave me high fives. There was a kid who hugged me for five minutes straight! 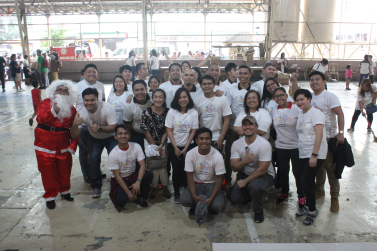 Last December 29 was my last day as Santa. And as the kids were being lined up for the obligatory picture taking, at around the tenth group or so, I found myself silently weeping. It was overwhelming to feel that much love. Good thing I was under all that fake hair and nobody noticed. But suffice it to say, I was genuinely touched.

In any case, as I stow away my Santa costume, all I feel is this sense of gratitude that I was able to contribute a small part in this. I guess that’s what TeamAsia teaches you. We always pride ourselves in creating next level experiences – because at the end of the day, that experience can touch people’s lives.

Dressing up as Santa Claus is small in the grand scheme of things but you never know the effect it will have on the children who saw you. Maybe a decade from now, one of those kids will dress up as Santa Claus and reflect on this just as I am doing now.

Here’s to more next level experiences this year. Cheers!